RND Automation placed Fusion 360 in the hands of their machinists to streamline their manual processes.

As Autodesk continues to bring the Future of Making Things to life for Manufacturers, many are struggling to understand where and when do you start using the new tools that are being developed within the Fusion 360 group. The tools do some really nice things, but the ability to fully replace the modeling tools of today, like Inventor or Solidworks, are still just out of reach. We thought we would share some of the uses that our clients are finding in hopes that you may find similar value as the products mature.

Before RND got Fusion 360 as their main CAM software, their two machinists would either make all the parts manually or program the parts themselves with G-code. Parts still came out great just like all old school machinist parts, but they took a very long time to make. This was not very cost effective. The owner, Sean Dotson, got to looking at Fusion 360 and thought it might be a fit for their machining process and asked the team to try it out…they found success.

Now, when a project is released to Travis Robert, Materials Manager, he uploads all the parts for the project into their separate job folders inside Fusion 360. Then, the two machinists that used to manually program line for line with G-Code, now quickly program each part themselves within this software. They usually tried to keep a backlog of programs staged, so they could keep all of their machines continuously running and this allows them to keep up now.

Several improvements have occurred with the largest by far being the speed at which they make parts now. A part that used to take them 2hrs now takes them 30 minutes. Another item that they are just getting into is nesting. When they have a lot of multiples, or even just 2-4 parts, they will make all of them in just one operation rather than loading part after part. 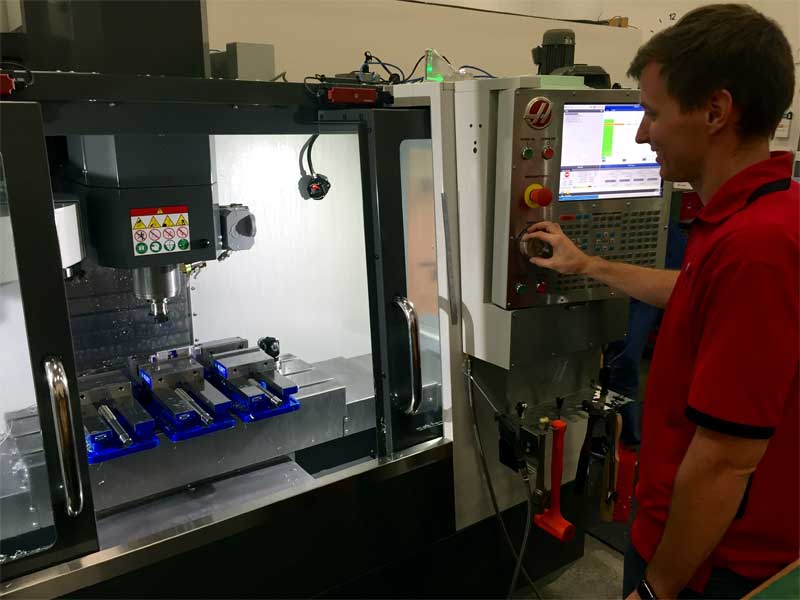 Another large improvement was improved finishes and tolerances on the materials. Before they had Fusion 360, they would make a lot of their parts on the manual mill using stock material as one of their finished sides. Per Travis, “Unless you are lucky, you really aren’t going to get tolerances within .010” doing it this way.”

If they had to make it on the CNC they would manually enter G-code where there was a lot of room for Error.

Now they use Fusion 360 with oversized material; they skim one side to get a perfectly flat surface, along with doing all of their first operation machining. Then they flip it over and skim the extra material that they were holding on and do the final operation on the part. With Fusion 360, it comes out perfect. The finish on it is mirror and the tolerances are dead on.

“On top of that, doing any kind of compound angles or 3D profiles were almost impossible previously.” States Travis. Now they do them all the time with ease.

Autodesk Fusion 360 includes HSM’s High Efficiency Roughing operation known as Adaptive Clearing to quickly rough out material in the most efficient manner even on 3D surfaces. With the easy to add 3D finishing operations directly on your solid model, programming and machining time is greatly reduced while extending the life of your tools.

RND Automation & Engineering is one of the largest custom automation machine builders and robotic integrators in the Southeast. Visit them at www.rndautomation.com

If you have a story or lesson that others could benefit from, please let us know.

NOTE: The fastest method is still to use Autodesk Inventor or Solidworks with HSM to get a fully integrated solution. This allows you to reduce file tracking and eliminate reprogramming on ECO's. However, for those that don't have the full products distributed through your organization, this is the next best thing. If you're looking to automate your machining and nesting, let us know and we can share what TruNest and their family of products can do.

If your company would like to participate in a D3 Customer Spotlight, or if you would like to learn more about streamlining your process, please contact D3.